Last night, in a quirky Norwich pub, gathered a handful of synth-heads for the inaugural Norwich Synthesizer Group Meet. Organised by Bill Cerebral and hosted by The Birdcage in the trendy Lanes area of Norwich, we plugged in our synths and had an unexpectedly enjoyable time. By that I don’t mean that I didn’t expect to have fun, just that I didn’t expect to have this much fun!

I’d decided to bring a 104hp skiff of modular. No Mother-32, 0-Coast or any other bits and bobs, just my Eurorack, oh, and my BeatStep Pro for sequencing. Bill had brought along a Korg Volca Keys and we were joined by Mark with a Bastl Kastle and Martin with a flipping Korg MS-20 mini and an assortment of stomp boxes. With a little mixer and a ridiculously small speaker we were soon making bleeps and noises. 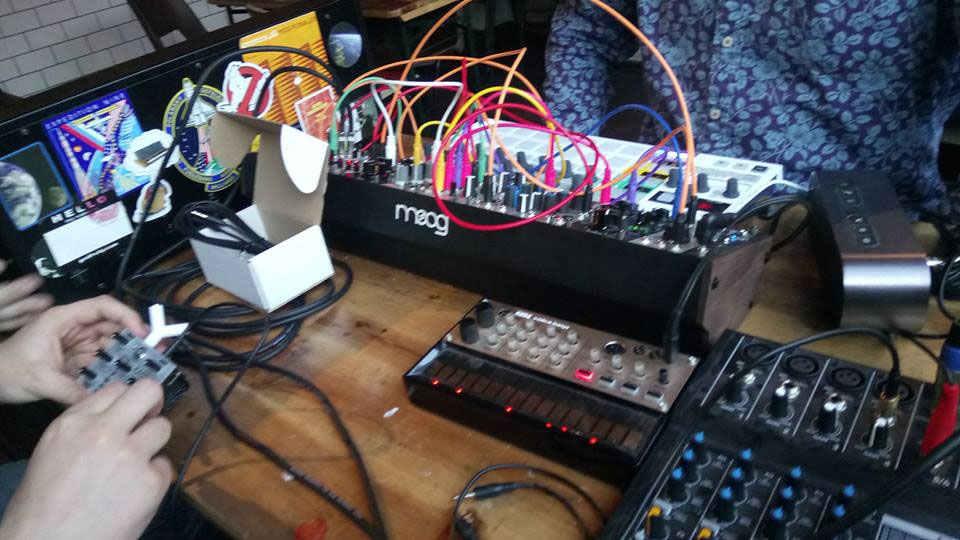 There were some challenges. First we had to get the piped music turned off. Then we had a bunch of students, sharing half a pint of cider between them, who decided to play chopsticks on the pub piano. On the technical side we had assumed that synchronisation would be as simple as passing a cable from sync out on the Volca to sync in on the BSP but that didn’t seem to work. Either the BSP slowed to a crawl or it sent the Volca into spasms of hyper-speed depending on the direction of sync. Of course, I famously don’t ever read manuals so I have no idea what, if any, the settings should be on the BSP. The solution is probably to bring the MIDI cables next time.


Eschewing sync for a more freeform approach the music flowed remarkably easily. I was completely impressed by the spacey noises the Volca Keys could generate. The Kastle seemed to be an evolving and brilliantly unruly maker of melodic noise while the MS-20 warbled and wandered over the top. The depth of knowledge these guys had on their gear put my feeble grasp of synthesis to shame. Their ability to deep dive into discussion over the intricacies of the Kastle seemed to know no bounds.

Beer flowed (resolutely not on the same table as the gear), conversation bubbled, and sound poured from the still ridiculously small but surprisingly loud speaker for which I had a renewed respect. 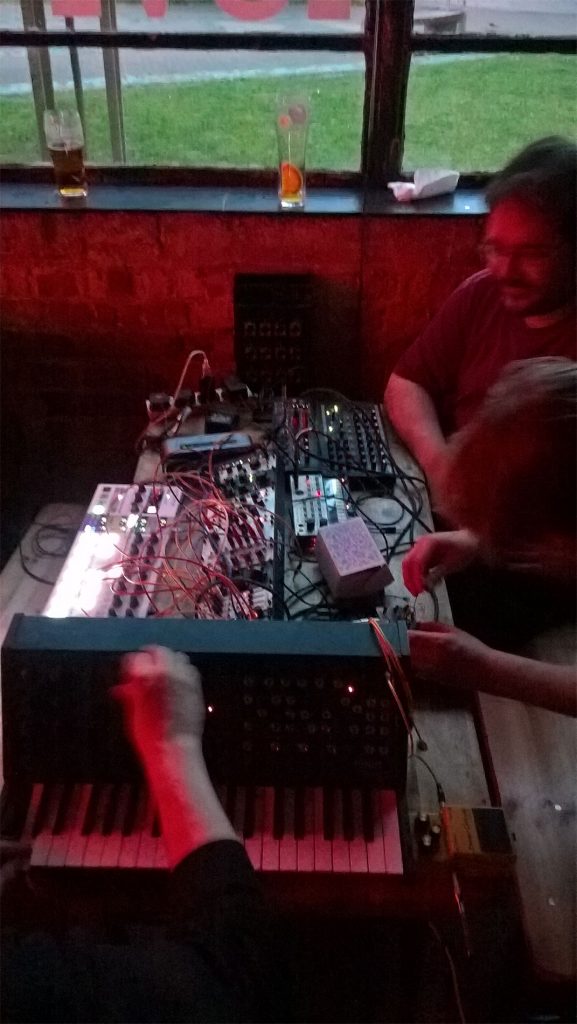 For my part my rack was a complete revelation. I started off with my goto patch of Maths cycling envelopes and Batumi moving the Erica filter and Wavetable oscillator. And then I just played with it, and it was amazing. I wasn’t amazing, the modular was. If you’ve seen my last video you’ll know that I haven’t had much time to sit and play with my rack. And here I was, intentionally spending time, trying not to sound like an idiot, accidentally crafting sound. I pumped in the odd sequence, modulated the Maths envelope out of existence, fiddled with the Pico DSP and discovered that delay I’d been looking for, and then dropped in some drums. It was sublime. Then I got lost, pulled out a load of cables and let the others have a go. I was quite pleased with myself that I was mostly able to explain what was going on. As soon as Bill sat down he did something extraordinary – he patched a square wave from the Batumi LFO to the wave selector on Erica Wavetable VCO. He pushed up the rate and instantly got a chiptune style sound going on like he did it on purpose. That would never have occurred to me.

As more beer was sourced I spent some time massaging the modular. I modulated the speed of the square wave modulating the wavetable, set a very slow sequence going, introduced the sub bass, trimmed the envelope modulator, pushed the delay to the limits and this amazing sound began to emerge. It was intoxicating – although that may have been the beer. The Volca was still being spacey, the Kastle bubbled and the MS-20 noodled and for a momentary eternity it was sonic bliss.

Then we went home.

Hopefully more Norwich Synth Meets will appear. If you live anywhere near Norwich I would urge you to come along. Or if you live somewhere else – start your own one! Of course it might all end up being repetitive noise, like the electronic equivalent of a boring 12 bar blues jam session, but I don’t think it has to do that. We might need a more catchy name though – like Swampy Synths or Delia Fiddlers or Norwich Knobs….