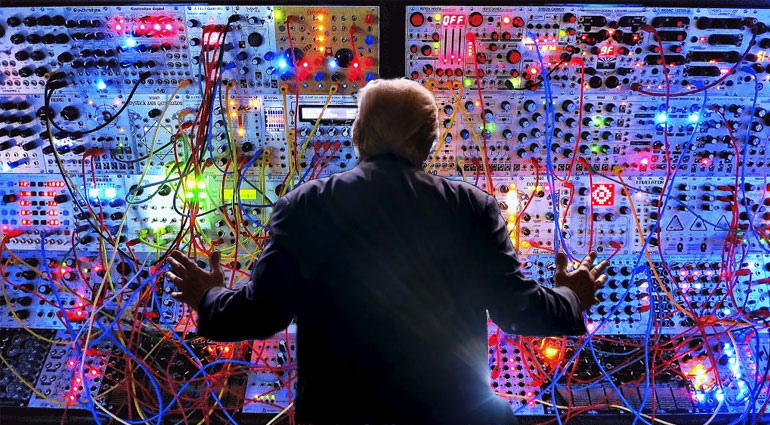 As Donald Trump becomes President of the USA I felt I wanted to reflect on how his plan to make America great again could do well to follow the example of the recent transformation of synthesis.

Just like the American dream, synthesis had become bloated and creatively corrupt. The three big synthesizer corporations of Korg, Roland and Yamaha delighted in the awesomeness of their massive synthesizer creations. The technology was so fabulous, the sound so enormous that we didn’t really notice the loss of personal patch creation in the wash of effects and multis. The computer, that has been the source of amazing democratization, seemed to trap musicians into a loop of preset surfing. Like never finding something decent to watch on a thousand channels of TV we would click through preset after preset, finding nothing inspirational despite every sound on the planet being available to us.

How did we get to this state of huge and impenetrable hardware and software? With so many presets and features at our disposal did we lose the ability to craft our own sounds? The tools that are supposed to free our creativity are the very things that keep us locked in an endless loop of auditioning kick drum samples.

Before too long, in whispered internet gatherings, people started to hanker after the good old days. When things were simpler, when a knob did what it said it would, when sounds were crafted from raw waveforms, when a “patch” was actually a thing involving patch cables. They looked to Moog and Buchla and found them financially out of reach. Old classic synths had become collectors items – the playthings of the wealthy and successful, the opposite of what we’d come to expect through the cheapness of our digital lives.

Hope came from unusual places. A French company, with humble beginnings in software music making (Storm – remember that?), had been emulating classic synths in software for some time. It took what they’d learned and produced a little analogue synthesizer. Arturia’s MiniBrute was small, bold and brash. It had a fat sound and all the knobs and sliders you needed to control it. There were no presets, it sounded however the knobs dictated. And it was cheap.

Nostalgia overwhelmed the market. Korg and Roland responded with reinterpretations of their back catalogues, feeding on the interest in everything old. The Korg Volca’s made cool synths affordable, Roland’s Boutique range brought back sounds that were thought to be lost. People wanted reality, something to get their hands on. In the software world this was interpreted in the production of huge orchestral libraries, and the remarkable arrival of scores of emulated vintage electric pianos. Nostalgia fed into everything and for a while it felt awesome.

But you cannot move forward by looking backwards. Great though it is to be able to sound like we used to sound, to find comfort in familiarity, to be making sounds again, it’s still being dictated to us by the big corporations. We are still being fed what we are told we want. We’re given this rosy picture of the past that forgets the tuning issues, the incompatibilities, lack of polyphony, scientific knowledge and huge costs involved. The emulation of the past is cheaper, cleaner and more accessible but that’s not where this story ends.

Just outside the mainstream has been a merry bunch of synthesis enthusiasts who have forged their own path. Electronic engineers fiddling with circuitry and sound, finding a global community of like minded people on the internet. Ideas were swapped and developed, standards of compatibility and control were embraced and a new generation of modular synthesis began to emerge. This was not the modular of Moog or Buchla, although their influence runs through every module, this was something breaking free of old paradigms. It’s a form of synthesis that doesn’t distinguish between analogue and digital, it welcomes both computer control, analogue modulation and human interaction. It’s not focused on purity, it’s focused on openness and interactivity.

The modular community has cut straight through the soggy nostalgia of the mainstream and offers a way forward. A way that learns from the past but embraces a future that’s open source, that’s compatible, that works best with diverse ideas and concepts feeding into each other. It’s scalable from the simple and affordable to the complex and painfully expensive. It welcomes all comers and supports the journey in their shared passion for synthesis. This expression is now informing the mainstream to the extent that CV/Gate is appearing on everything. Manufacturers like Behringer are reaching out to these communities for input into products. Eurorack is everywhere and barriers to entry are being worn away. Social media is full of video clips of someone’s latest proud patch or musical creation. This is what is making synthesis great again.

Nostalgia will only get you so far. To really move into the future requires a letting go of some traditional conflicts and arguments. It requires an open collaboration between different styles and ideologies. Allowing people to make choices or no choices, without fear of ridicule. It requires the support of small, independent business and a connection to the customer that the big corporations have lost. Greatness in the future is to embrace diversity, to see everything working together to fuel creativity. Because it’s in that creative space that fear is replaced with hope, fun and electronic beeps, farts and noises.

Mr Trump, this is the way you could make America great again.